Trumpism, 21st Century Fascism, and the Dictatorship of the Transnational Capitalist Class

Contrary to perception, Donald Trump is a member of the transnational capitalist class (TCC).  His vast business empire spans several dozen countries around the world. Much of his “populism” and his anti-globalization discourse have to do with demagogy and with political manipulation in function of the electoral campaign. Trumpism and the specter of 21st century fascism must be seen as a response to the crisis of global capitalism. Trump’s global business empire could not flourish without capitalist globalization and without the super-exploitation of immigrant workers in the United States.

The TCC and Trump himself depend on immigrant labor for their capital accumulation and they do not intend to do away with a labor force that is bonded due to its condition as undocumented rather than citizen and “legal”. His electoral promise to deport 10 millions undocumented immigrants, now reduced to some three million, and his proposals to intensify the criminalization of immigrants, are an attempt, on the one hand, to convert the immigrant population into a scapegoat for the crisis and channel fear and insecurity among the (majority white) working class against this scapegoat rather than against the system. The dominant groups, on the other hand, have been exploring ways to replace the current system of super-exploitation of undocumented immigrant labor with a mass “guest worker program” that would be more efficient in combining super-exploitation with super control. 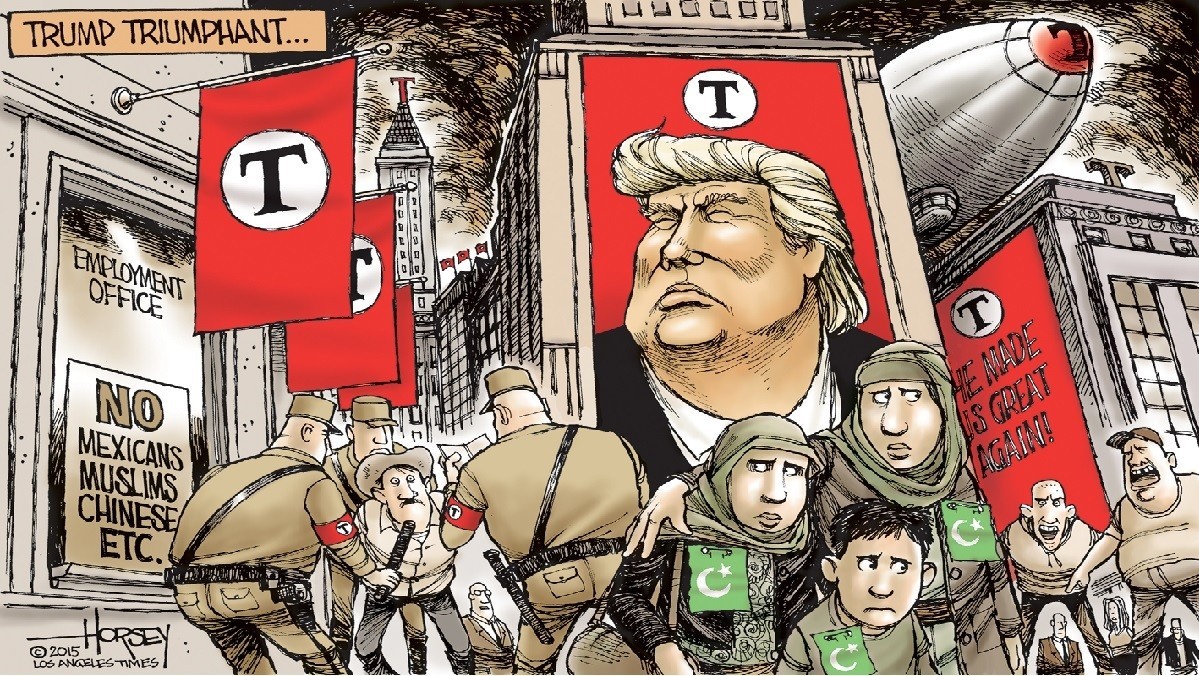 Trump (and more generally the TCC) seek to place downward pressure on wages in the United States in order to make U.S. workers “competitive” with foreign workers. The downward leveling of wages across countries and the “race to the bottom” has been a general tendency under capitalist globalization that Trumpism certainly intends to continue, now through a discourse of making the U.S. economy “competitive” and “bringing jobs back home.”

We cannot under-emphasize Trumpism’s extreme racism but we need to deepen analysis of it. The U.S. political system and the dominant groups face a crisis of hegemony and legitimacy. Racism and the search for scapegoats is one key element in their efforts to face this crisis. At the same time, major sectors of the white working class have been experiencing social and economic destabilization, downward mobility, heightened insecurity, an uncertain future, and accelerated “precariatization,” that is, ever more precarious work and life conditions. This sector of the working class historically enjoyed the ethnic-“racial” privileges that come from white supremacy vis-à-vis other sectors of the working class. But they have been losing these privileges in the face of capitalist globalization. Now racism and the escalation of veiled (coded) and also openly racist discourse from above is aimed a channeling this white working class sector into a racist and a neo-fascist understanding of their condition.

Trumpism’s veiled and at times openly racist and neo-fascist discourse has “legitimated” and unleashed ultra-racist and fascist movements in U.S. civil society. I have been writing about the danger of “21st century fascism” as a response to the escalating crisis of global capitalism. The far-right response to this crisis explains the rise a neo-fascist right in both Western and Eastern Europe, the vengeful resurgence of a neo-fascist right in Latin America, and the turn towards neo-fascism in Turkey, Israel, the Philippines, India, and elsewhere. One key difference between 20th century fascism and 21st century fascism is that the former involved the fusion of national capital with reactionary and repressive political power, whereas the latter involves the fusion of transnational capital with reactionary political power. It is crucial to stress that Trumpism does not represent a break with capitalist globalization but rather the recomposition of political forces as the crisis deepens. If we want to understand political phenomena we must not confuse surface appearance (or discourse) with underlying essence.

Trumpism represents an intensification of neoliberalism in the United States together with a major role for the state in subsidizing transnational capital accumulation in the face of stagnation and overaccumulation. For example, Trump’s heralded proposal to invest one trillion dollars in infrastructure, when we examine it closely, is in reality a proposal to privatize public infrastructure and to transfer wealth from labor to capital by corporate tax breaks and subsidies for the construction of privatized infrastructural works. We can expect under the Trump regime an effort to further privatize what remains of a public sector, including schools, veterans affairs, and possibly social security, along with the drive to further transfer wealth from labor to capital through corporate tax cuts and austerity.

It is a mistake to view 21st century fascism as a political development outside of the “normal” progression of global capitalism. This global capitalism faces an unprecedented crisis of social polarization, of political legitimacy (hegemony), of sustainability, and of overaccumulation. The transnational capitalist class has accumulated trillions of dollars that it is finding ever harder to “unload”. In recent years it has turned to mind-boggling levels of financial speculation, to the raiding and sacking of public budgets, and to what I call militarized accumulation – that is, to endless cycles of war, destruction an reconstruction, to “accumulation by repression” (private prisons and immigrant detention centers, border walls, homeland security technologies, etc.), and the construction of a global police state to defend its global war economy from rebellions from below.

Trump’s electoral base among the white working class will discover very early on in his regime that his promises were a hoax. How will their rage be contained? Will they be recruited into projects of 21st century fascism? Political and economic elites in the United States (and worldwide) are currently divided and confused. But the dominant groups, if and when the mass of humanity, the global working class, poses a challenge to TCC control, they will unite to defend their rule. The liberal elements among the transnational elite will be unlikely to object to 21st century fascism in political power if that is what it takes to beat down challenges from below and maintain control. I fear we are before the gates of hell.  There will surely be massive social upheavals from below, but also an escalation of state and private repression.

The spiraling crisis of global capitalism has reached a crossroads. Either there is a radical reform of the system (if not its overthrow) or there will be a sharp turn to “21st century fascism”. The failure of elite reformism, the unwillingness of the transnational elite to challenge the predation and rapaciousness of global capital, has opened the way for the far-right response to crisis. In the U.S. the betrayal of the liberal elite is as much to blame for Trumpism as are the far-right forces that mobilized the white population around a program of racist scapegoating, misogyny, and the manipulation of fear and economic destabilization.

But critically, the political class that has been in place for the past three decades is more than bankrupt – it is feeding the turn to the far right. Its brand of identity politics has served to eclipse the language of the working and popular classes and of anti-capitalism. It helps to derail ongoing revolts from below, has helped push white workers into an “identity” of white nationalism and helped the neo-fascist right organize them politically.

A global rebellion against the transnational capitalist class has been spreading since the financial collapse of 2008. Wherever one looks there are popular, grassroots, and leftist struggles and the rise of new cultures of resistance. Can we beat back the threat of 21st century fascism? Our efforts must involve an analytical clarity as to what we are up against. Trumpism is not a departure form but an incarnation of an emerging dictatorship of the transnational capitalist class.

William I. Robinson is an American professor of sociology at the University of California, Santa Barbara. His work focuses on political economy, globalization, Latin America and historical materialism. He is a member of the International Parliamentary and Civil Society Mission to Investigate the Political Transition in Iraq.