The world system theory developed by Wallerstein (1974, 1979, 1997, and 2004) provides a broad theoretical perspective to understand the historical evolutions and changes involved in the rise of the modern capitalist world system. This capitalist world system expanded over a long historical spectrum and brought different parts of the world into its division of labor, leading to a perpetual condition of economic core-peripheral relations. Under this single division of labor within one world market, a political structure consisting of sovereign states and multiple cultural systems interacts within the framework of an interstate system. The world system is conceptualized as a dynamic one in which changing positions within the system’s structural morphology is possible by taking advantage of global capital mobility and relocation of production. Historically, the division of labor within the capitalist world economy brought about and resulted in flows of commodities, labor, and capital across different geographical areas through chains of production, exchange and investment.

China and India are seen as the last reserves (unexploited areas) that have been brought into the capitalist world system (Li, 2008). The world system theory attempts to explain the system’s embedded inequalities in which nation states have quite different development stages within a seemingly unified global economy. In line with this theory, the different positions in the global division of labor and the change of patterns of competition and competitiveness planted the system from the very beginning with contradictions that led to the dichotomy of development vis-a-vis underdevelopment. 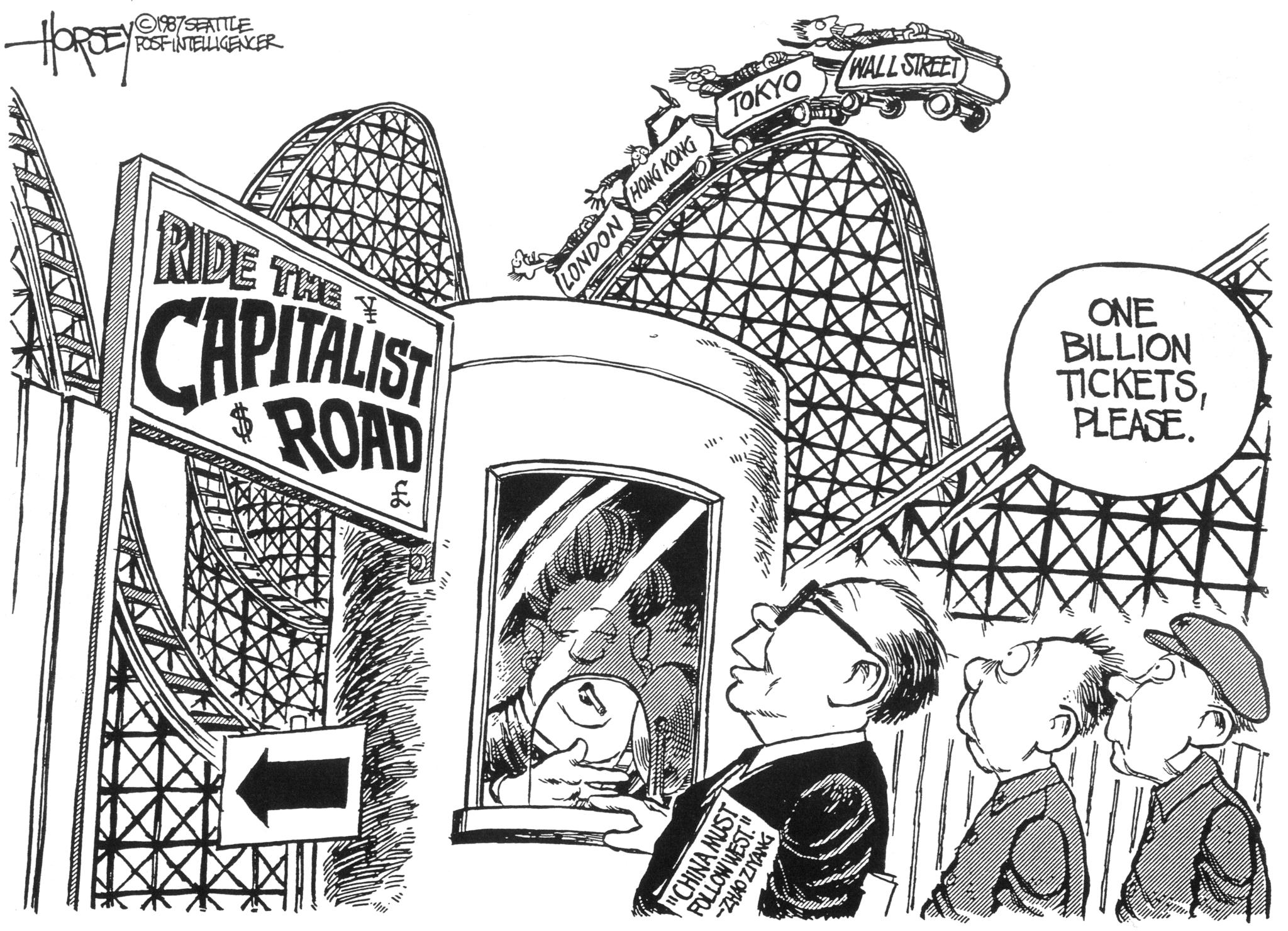 The capitalist world system is understood to be embedded with fundamental features, characterized by a series of cyclical rhythms, i.e. economic prosperity or crisis, and upward or downward mobility. More importantly, this series of cyclical rhythms was followed by the rise and decline of new guarantors (new hegemons), and each one had its own unique pattern of control (Wallerstein, 1997). Likewise, the current phenomenon of emerging powers in general and the rise of China in particular can be plausibly perceived as part of the system’s rhythmic cycles in the upward mobility, and China continues to follow the core features of the world capitalist system. China is believed to be motivated or driven to act as a new political and economic system-guarantor due to its economic integration and market dependence in the system’s mode of production and capital accumulation.

Nevertheless, new emerging powers, especially China, are also described as a challenger to the system’s existing dominant guarantor and other core powers because they have different political and economic governing cultures. Nowadays China is perceived as having an intention of establishing a “Sinicized” capitalist world order – an order with “Chinese characteristics”. However, in line with the world system theory’s interpretation, even if the future world order were to be injected with Chinese characteristic, it would simply be a reflection and extension of China’s internal economic, political and cultural structures without altering the core architecture of the world capitalist system.

Thus, contrary to the pessimism of conservative realism, the world system theory does not view the rise of new guarantors (later-comers) as a threat as long as the system’s fundamental core features – mode of production and the logic of capital accumulation – are maintained. This is because the advance of the latecomers hugely benefited from their integration in international division of labor and active participation in the process of capital and wealth accumulation. Accordingly, the rise of China and emerging powers is understood as part of the cyclical rhythms of the system, which symbolizes the strength and success of the world system in bringing more untapped parts of the world to the logic of capitalism without changing the fundamental relations of inequality within the system. The world system theory’s logical argument is clear: when China is successfully moving toward the core, it still needs periphery. The rise of China will eventually generate “promotion by invitation” and bring about the enlargement of “room for maneuver” and “upward mobility” for the global periphery that is tempted to “seize the chance”.

In the view of the world system theory, for capital to be shifted away from the declining sectors into the profiting sectors, the declining sectors need to be relocated to semi-periphery or periphery countries according to their labor condition and technological level. Some of these countries will ben­efit from global capital mobility and production relocation. Historically, it was in such pivotal moments that opportunities for upward mobility within the system were generated and regenerated (promotion by invitation) (Wallerstein, 1979). China’s high economic growth in the past decades is a good story reflecting the positive spill-over ef­fect of taking advantage of the system’s upward mobility (seizing the change). “Room for maneuver” refers to the external conditions for “upward mobility” in the world capitalist economy that is conducive to internal development. Seen from a long historical perspective, the global core-semiperiphery-periphery hierarchy defined by the world system theory has been a relatively stable structure over centuries. The system’s rhythmic cycles and the rise or decline of hegemonic powers provide both upward and downward mobility. The post-war rise of the US was the clear example of upward mobility, and so was China since the 2010s. A positive effect of upward mobility is reflected by the combination of external forces, e.g. “promotion by invitation”, and internal forces, e.g. “seizing the chance”.

“Promotion by invitation” refers to the upward mobility path enjoyed by a semi-periphery or periphery country, whose geopolitical position is vital during the period of global power struggles, or whose internal condition is favorable to global capital mobility and production relocation. This upward mobility is stimulated by the favorable external environment created by the promotion and invitation of the existing hegemon, or by a group of core nations, for the sake of their own geopolitical and geo-economic interests. In East Asia, Japan and the East Asian Newly Industrialized Economies (NICs), including post-Mao China, are good examples of this type of upward mobility by external promotion. “Seizing the chance” indicates the internal capability in taking advantage of a new situation or condition that is taking place in the international political economy and to adjust the internal development mobility accordingly.

The rise of China together with its capital outward expansion and global hegemonic strategy seemingly represents another rhythmic cycle of the rise of a new hegemon. It is an opportunity in terms of room for maneuver and upward mobility for some countries, while a challenge and downward mobility for others. For example, the Brazil-China trade relations represent two sides of the same coin – the coexistence of opportunities and constraints. On the one side, Chinese investment in Brazil and Brazil-China trade relations are becoming more and more important to the country bringing many benefits to the country. On the other side, the bilateral unequal exchange of trade, with China exporting manufactured products and Brazil exporting commodities and raw material, is making Brazil a commodity-exporting country and is seen by some as “deindustrializing Brazil”.

The current Chinese “One Belt One Road” initiative (OBOR initiative) can be seen as another global project that will generate the effect of “room for maneuver” and “upward mobility” for the countries and regions along the belt and road economic routes. The OBOR initiative involves billions of Chinese-led investment program covering a web of infrastructural projects, including roads, railways, telecommunications, energy pipelines, ports, etc. This would serve to enhance economic interconnectivity and facilitate development across Eurasia, East Africa and more than 60 partner countries. Beijing sees the OBOR as a great potential for economic gain and increased border security and peace, while positioning China’s western regions as its future center for economic gravity. In a world, the OBOR’s uttermost objective is no doubt to reposition the global economy with China as one of the dominant players in the coming new world order. As China’s plan to forge a new global economic order by drawing on the millennia-old legacy of the Silk Road trading route, such a grand OBOR project is organically linked with Beijing’s proactive engagement in financial “minilateralism” in recent years as an attempt to create global supporting financial institutions, such as the BRICS Bank, the New Silk Road Foundation, the Asian Infrastructural Investment Bank.

Although the OBOR initiative generates a mixture of hope and fear, it is nevertheless altruistic to the extent that pragmatism and the fulfillment of China’s national interest lead the country to adapt its foreign policy to the requirements of domestic and international reality. China is becoming an important global role-player and China does not want to be a bystander. Although it is expected that the OBOR initiative will be constrained by a variety of geoeconomic and geopolitical complexities.

It is, nevertheless, part of an emerging new order with Chinese characteristics: a growing role of Chinese yuan and the inspiration of a normative power for an alternative development model. In conclusion, the OBOR initiative reflects, therefore, a multifaceted interplay of realism, liberalism, altruism, hope and fear between China and the western world. After all, the rise of China and the principal powers of the existing world order will have to go through a considerable period of struggle, adjustment and tension.

Li, Minqi. 2008. The Rise of China and The Demise of The Capitalist World Economy. New York: Pluto Press.

Li Xing, PhD., is Professor and Director of the Research Centre on Development and International Relations, Department of Culture and Global Studies, Aalborg University, Denmark. He is also the Editor in Chief of the Journal of China and International Studies (ISSN: 2245-8921).

Professor Li Xing has been in recent years engaged in writing and editing a series of anthologies around the theme of the rise of China and the world order, such as The Rise of China and the Capitalist World Order (Ashgate, 2010); The Rise of China and the Semi-periphery and Periphery Countries (Aalborg University Press, 2012); China-Africa Relations in an Era of Great Transformations (Ashgate, 2013); The Rise of the BRICS and Beyond: The Political Economy of the Emergence of a New World Order? (Ashgate, 2014); Emerging Powers, Emerging Markets, Emerging Societies: Global Responses (Palgrave MaCmillan, 2016). He is now editing a volume on Mapping China’s One Belt One Road Initiative (Palgrave MaCmillan, forthcoming, 2018).