The Fate of the Nation-State, Globalization vs. Regionalization: The Catalan Case

On October 27, 2017, the Catalan Parliament declared unilateral independence from Spain. The Spanish Prime Minister Mariano Rajoy vowed to “restore legality” as reported by AFP. Is Catalonia looking to repeat the tragic events it experienced during the 1930s? Spain is insisting on maintaining a Catholic marriage with Catalonia: Once you are in, there is no way out! Why this reaction?

To answer this question, let’s go back to the early 1990s when the breakup of Yugoslavia and the dissolution of Czechoslovakia occurred both as a result of a series of conflicts and political crisis. These “divorces” were supported and authorized by Europe since they were part of the strategic objectives of the Capitalist camp, namely tearing down the Soviet power, the Cold War enmity oblige. Europe deemed these divorces appropriate under the guise of respecting the will of the people, in the name of freedom of choice. All this, to stay within the so dear framework of democracy. Europe extended its support and helped these Southeast and Central European countries and even included some of them within the EU family. The questions then that arise are: Why refuse Catalonia the same privilege? Why is it that what was right for the Eastern Republics is not right for Catalonia? Why this double standard?

The EU’s hypocrisy vis-à-vis its values is blatant. The EU hides behind the Spanish Constitution, sides with Spain and, in this case, does not want to interfere in the internal affairs of the kingdom. It is interesting to note, that when it suits the EU’s interests, the interference in another state’s affairs is justified by the popular will to exercise its democratic choices. When it does not suit the EU’s interests (namely here the threat of the disappearance of the traditional nation-state), the EU “forgets” its principles and values on which it has been built!

To understand this reaction, we turn to history. In 800, Charlemagne became the first Emperor in Western Europe that he unified during the early Medieval Period. His descendants shared Europe, and each one of them held a region. There was a power fragmentation between them and the seigneurs which led to conflicts and wars that decreased with the Peace of Westphalia in 1648. This series of peace treaties are considered the birth certificate of the European nation-states. However, within these states, there were still many different regimes. The nobility continued managing territories and populations along with the Royal administration. The competition between these two levels remained until the French Revolution (1789) and the Industrial Revolution (1760-1840). Following these two major events, each nation-state wanted to unite its management by creating (what will be) the Weberian Modern State. Its characteristics are 1) administrative and legal regulations that can be modified bylaws; 2) an administrative apparatus that enforces its laws; 3) authority over a given territory, and 4) the monopoly of legitimate violence.

So each nation-state worked on homogenizing and uniting its territory, and on standardizing the language and units of measurement while nationalism did the rest. The countries that benefited the most from this unification are Germany thanks to Metternich and Bismarck, Italy thanks to Count of Cavour and Garibaldi, and France thanks to Napoleon Bonaparte.

Later on, the two world wars happened, and with them, a new European geography was drawn. At the end of the Second World War, the European thinkers realized the consequences of extreme nationalism and their weakness vis-à-vis the US. They came up with the project of a united Europe that Churchill resurrected in 1946, by bringing back the idea of a United States of Europe. This led to the Treaties of Rome in 1957 that took place while the Cold War was raging. Over the years, more European countries joined the family, which today counts 28 members. Let us note that Spain joined the European Economic Community (EEC) in 1986, years after emerging from Franco’s dictatorship.

That said, it seems that the EU is designed in a one-way direction, that of forming larger geographic areas through the exercise of free democratic choice. But when it goes towards the balkanization of the EU following the same principle, it causes an outcry. In other words, the dynamic conception of the EU is going from the nation-states to a united Europe, a Confederation similar in its geographical and demographic dimensions to the US and Russia.

Moreover, the EU has two living examples regarding management of the economy, space and the populations. These two models are oriented on a two-way opposite axis. The first one is geared towards a micro unit that focuses on the cultural specificities of a population, and that is represented by the Swiss Confederation (Switzerland). The other one is oriented towards a macro unit based on economic imperatives (i.e., market, resources) and that is represented by the US. The EU is torn between these two models, especially given that the traditional nation-state no longer meets the demands of the economy or cultural specificities.

The cohabitation of large nation-states with smaller nation-states pushed some regions to ask for their independence. The regions are interested in living in a united Europe while getting rid of the national state framework (considered as a useless intermediary). This results in competition between the central level and the united Europe. Thus, with time, the nation-state will be in the same line of sight as the regions seeking to emancipate themselves from the traditional nation-states.

The case of Catalonia is a hot topic, and there is no doubt that other cases will follow within Italy, Belgium, and France… The president of the Corsican Assembly has recognized the independence of Catalonia while France sided with Spain. The rift is interesting to follow and the breach is difficult to seal… In a world marked by globalization and miscegenation of the Global Village, human communities are quick to cling to their cultural specificities and want to preserve them at all costs, which is expressed by independentist movements in very limited spaces. The rise of social media encourages the strengthening of these links and acts as a facilitator. 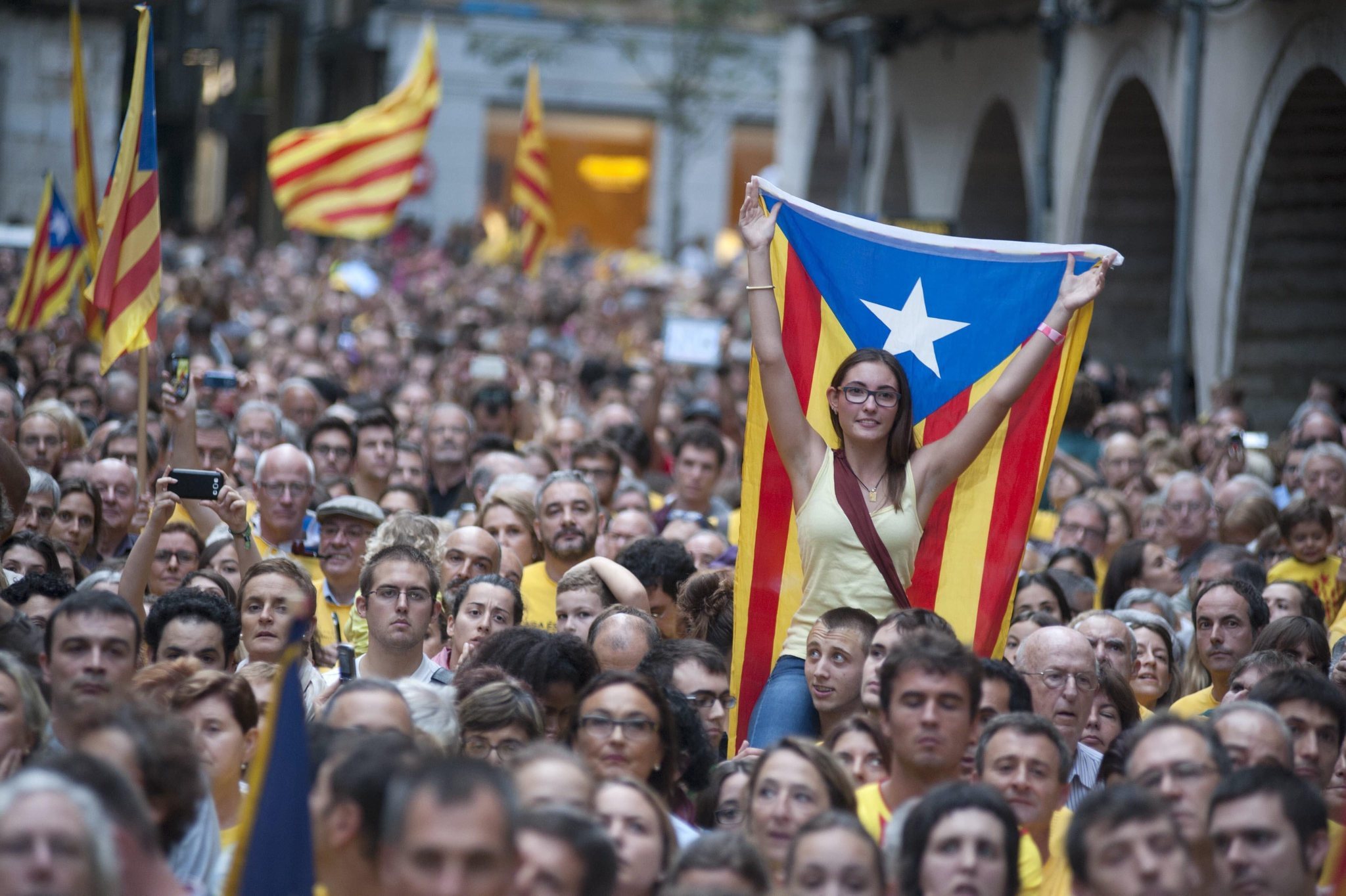 Meanwhile, the EU does not want to face the balkanization of its members. However, the fact that the EU supported the balkanization of Yugoslavia and Czechoslovakia is fatal to its unity and survival. Today, the boomerang returned: The EU must accept the consequences of its past acts and avoid having a double standard (whether to recognize and respect the popular democratic choice at all times or to refuse it at all times).

The current EU’s behavior vis-à-vis Catalonia is similar to the one of China vis-à-vis Tibet. Indeed, from its birth to the present day, the Middle Kingdom sinicized the conquered territories. It started with the first kingdoms, and it continued gaining more and more lands: the Great Wall of China is concrete evidence of China’s expansion. Today, China refuses secessions as it did in the past and is facing many domestic issues that are becoming transnational ones because of its behavior. For cultural and historical reasons (among others), Spain wants to keep Catalonia under its yoke while China, for historical reasons, wants to keep Tibet. If the EU is against Catalonia’s independence, then it should maintain the same approach and must be against the independence of Tibet. The democratic Madrid is acting with authoritarianism towards Catalonia as the authoritarian Beijing is doing with Tibet.

We live great historical moments where people communicate with each other instantly. How then to maintain and contain them in a state against their will while boasting of respect for human rights and democracy? The EU must be clear on democratic principles, and must respect them in all cases since this is imperative to the well-being of people who have expressed themselves democratically. The EU must not be content with the casuistry of politicians and all of those who have an interest in shirking the truth enshrined in the democratic principles. Otherwise, the EU is only accelerating its dislocation… Does the EU work for a ‘united Europe’ horizon or does it work for both horizons at the same time (united Europe and nation-states)? EU actions and upcoming events will tell…

Fatima-Zohra Er-Rafia is a lecturer at HEC Montréal and Polytechnique Montréal, a consultant, and an independent researcher. She holds a Ph.D. in Business Administration with a focus on China and Japan. Dr. Er-Rafia specializes in cross-cultural management, international affairs, strategy and organizational behavior. Her focus is on Weberian sociology, politics, economics, and history, and she uses aspects of all these disciplines to study Asia.

Dr. Er-Rafia previously served as a Corporate Strategist at Desjardins Group and as a Management Consultant, Director of Operations, and a Strategy and Business Development Consultant at Stratégies Internationales. She provides training for Business Executives at the international level and regularly gives presentations about Asia’s geopolitics, and its business, management, and culture. She is the recipient of several honors and awards and author of two book chapters on China and Japan, several articles and over twenty business case studies.