The Asian Infrastructure Investment Bank (AIIB): A Matter of Concern for the Existing Multilateral Development Banks?

In June 2015, the AIIB was officially launched, with 57 founding members and an initial capital of US$100 billion, to finance infrastructure and sustainability projects in the Eurasian region. As of November 2016, it has officially approved six projects in two batches of loans (see the table below). Although it may be too early to make a conclusion about the lending practices of this nascent organization, two preliminary observations are noteworthy. First, most of the projects are co-financed with other existing multilateral development banks (MDBs), such as the Asian Development Bank (ADB), the World Bank, and the European Bank for Reconstruction and Development (EBRD); and the AIIB will follow the existing MDB lending practices. Second, functionally the AIIB is supplementary to China’s ‘One Belt, One Road’ (OBOR) initiative. The question is why the Bank would have these two inclinations.

Co-Financing with other MDBs: In stark contrast with earlier critiques that the Bank would be a Chinese-dominated bank and that it would compete with, and defy the liberal norms of, other MDBs, the AIIB is collaborating with the ADB, the EBRD and the World Bank in at least five of the six projects. In addition, the Bank indicated that it would follow the lending principles of Western-led MDBs. Apart from the lending to Bangladesh, the lead administrators of the other five projects are the existing MDBs, not the AIIB. What are the possible reasons for this lending practice? 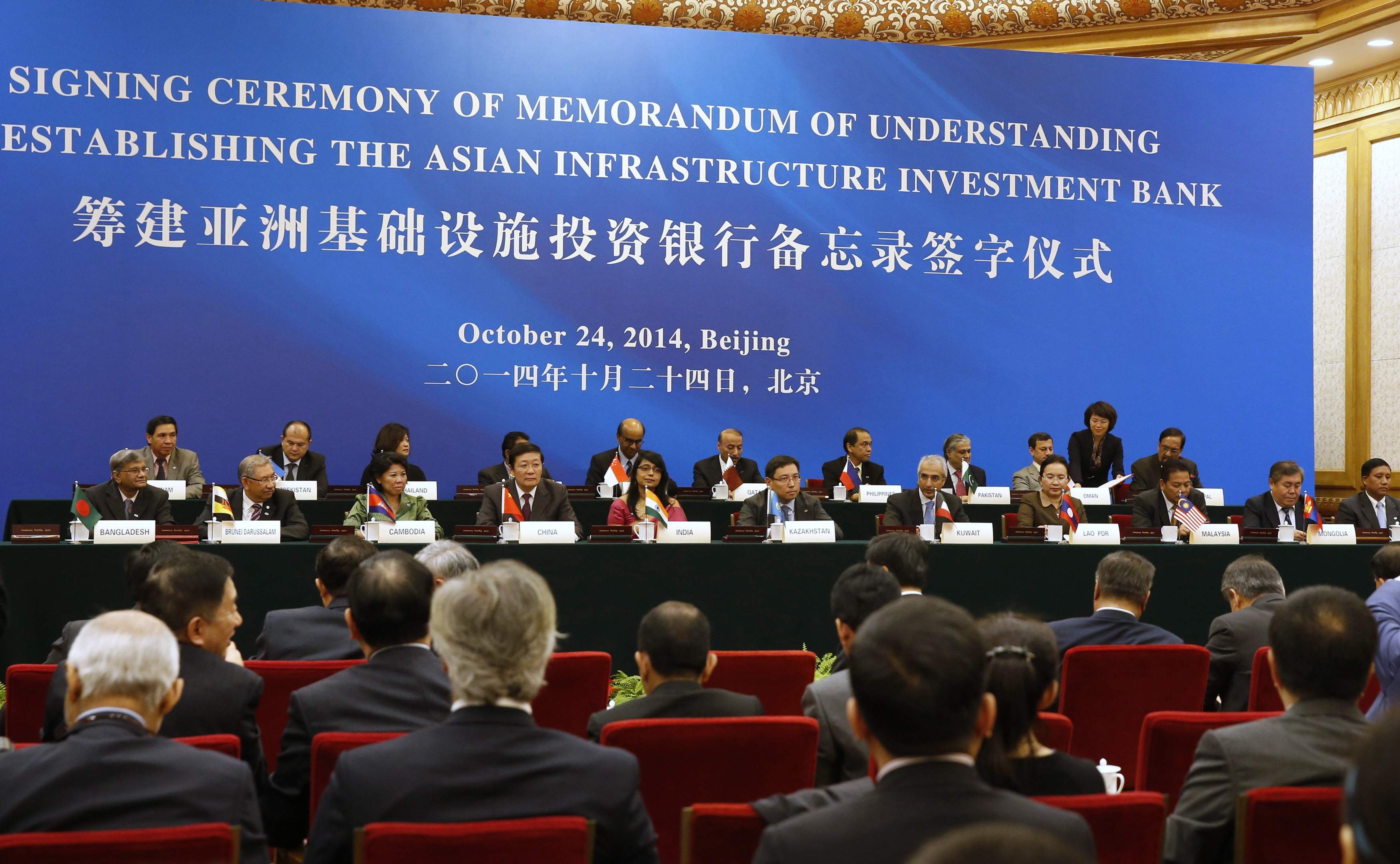 A general view of the signing ceremony of the Asian Infrastructure Investment Bank at the Great Hall of the People in Beijing October 24, 2014 Photo: Reuters/Takaki Yajima, Pool

Two rationales: First, China is excising self-restraint in order to allay concerns over the AIIB as primarily a Chinese-dominated bank that competes with other MDBs. As described by John Ikenberry, a leading state may exercise ‘strategic restraint’ in its participation in intergovernmental organizations in order to lessen the fears among lesser states of its domination or abandonment after victory. Before the establishment of the AIIB, there was considerable anxiety among policy makers about whether the existing Bretton Woods institutions’ international influence and clout would be diminished. They tended to see all MDBs would be involved in a zero-sum game, the success of one would be the loss of others. The Obama administration had tried to lobby American key allies, especially the UK, against joining the AIIB, with no avail. The UK, France, Germany and Australia eventually decided to join. In light of this criticism and the anxiety it has generated, China might want to allay the concern over its domination of the Bank by exercising self-restraint in order to attract more secondary states to join the new institution. Canada’s application for a membership of the AIIB in late August 2016 could be seen as a success for China’s self-restraint strategy and the Bank’s attractiveness to lure more advanced states to join.

Second, co-financing could reduce the risk of lending. Since the AIIB is still a nascent institution, Beijing has yet to have the required managerial skills and competence to vet carefully all applications and has to rely on the existing MDBs in that aspect. Co-financing is a means to minimizing financial risks to the nascent bank. In addition, co-financing could also increase the pool of material resource. This not only benefits the recipients but also helps to project China as a constructive player and builder of multilateral institutions; and that it is willing to provide global public goods. 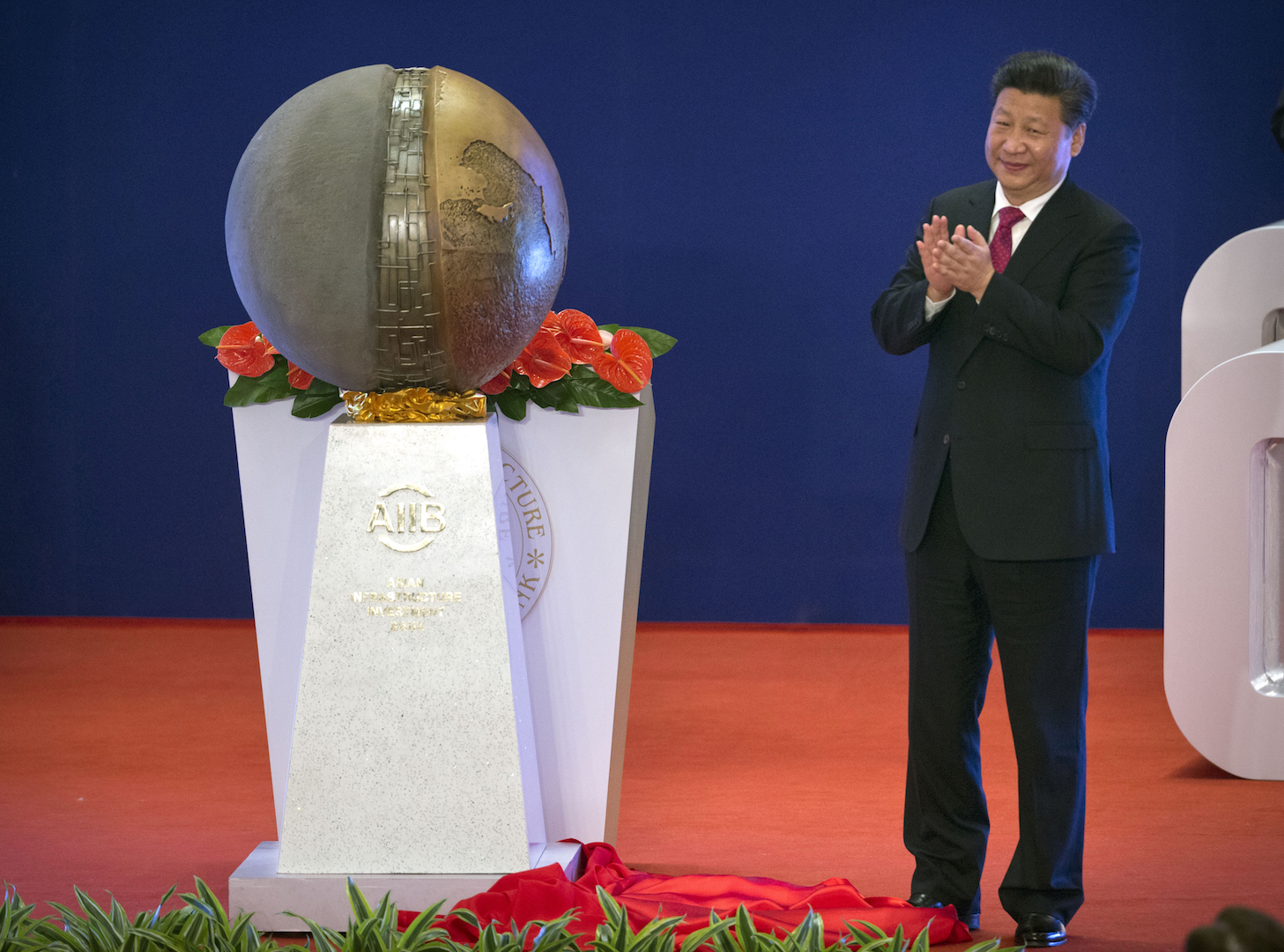 Supplementary to OBOR: All the joint projects between the AIIB and other MDBs are linked or supplementary to China’s OBOR. OBOR has two major components; one on land and the other by sea. The land-based Silk Road is officially called the ‘Silk Road Economic Belt’ and the maritime one called the ‘21st Century Maritime Silk Road’. The Belt will run westward via Central Asia towards Europe through six transnational China-centric economic corridors, linking up China with 47 countries together eventually. The Road will loop south and westward, linking up 11 Southeast Asian countries and 7 South Asian countries together.

As early as November 2014, when Xi Jinping announced the country’s $40 billion Silk Road Fund, he emphasized that the priority of the OBOR initiative would be on the infrastructure building in several neighboring countries, including Pakistan, Bangladesh, Myanmar, Laos, Cambodia, Mongolia and Tajikistan.1 Other Documents published by the State Council also included Indonesia as one of the foci of the OBOR initiative.2

As the flagship project of OBOR, a $46-billion China-Pakistan Economic Corridor (CPEC) agreement was signed by China and Pakistan in April 2015. The project aims to build an 887-km-long highway, N35, to connect the strategically important port of Gwadar in southwestern Pakistan with Kashgar in Xinjiang, China. The AIIB-financed M-4 project is part of the N35 highway. In the same year, China and Indonesia also inked an agreement to build a $5.5-billion high-speed railway line to connect Jakarta and Bandung.

To conclude, the AIIB might give China more say and influence in international development than ever before. However, as a multilateral financial institution, it is bounded by the established rules espoused by the existing MDBs. Through co-financing with other MDBs, it is playing a role to complement global rules and institutions. In addition, its geographical focus is not global but rather on Eurasia. Therefore, despite the fact that it has attracted consideration attention from the mass media and policy analysts, it is less likely to be equally influential as the Bretton Woods institutions or to possess the capacity to undermine the World Bank or the ADB. However, as seen from the first two batches of the AIIB’s lending projects, it is not difficult to see that the AIIB does not exist alone. It constitutes part of the China’s Great Game, the OBOR initiative. One would speculate that the AIIB serves as an institutional means of a larger Chinese project to transform regional order in the 21st century. Most, if not all, of the projects it has financed are supplementary to China’s OBOR macro-initiative, which includes bilateral development assistance projects, undertaken by state-owned enterprises. It is OBOR rather than the AIIB that would pose threat or challenge to liberal international order.

Lai-Ha Chan (PhD, Griffith) is a Senior Lecturer in the Social and Political Sciences Programme, School of Communication, Faculty of Arts and Social Sciences at the University of Technology Sydney, Australia. At the time of writing, she is a 2016-2017 Fung Global Fellow at the Princeton Institute for International and Regional Studies, Princeton University, New Jersey, United States. She is the author of China Engages Global Health Governance: Responsible Stakeholder or System-Transformer? (Palgrave Macmillan, 2011) and a co-author of China Engages Global Governance: A New World Order in the Making? (Routledge, 2012; with Gerald Chan and Pak K. Lee). Other publications have appeared in the Australian Journal of International Affairs (2016), Global Governance (2014), Review of International Studies (2012), PLoS Medicine (2010), Global Public Health (2009), Third World Quarterly (2008), and an award-winning article at Contemporary Politics (2008).